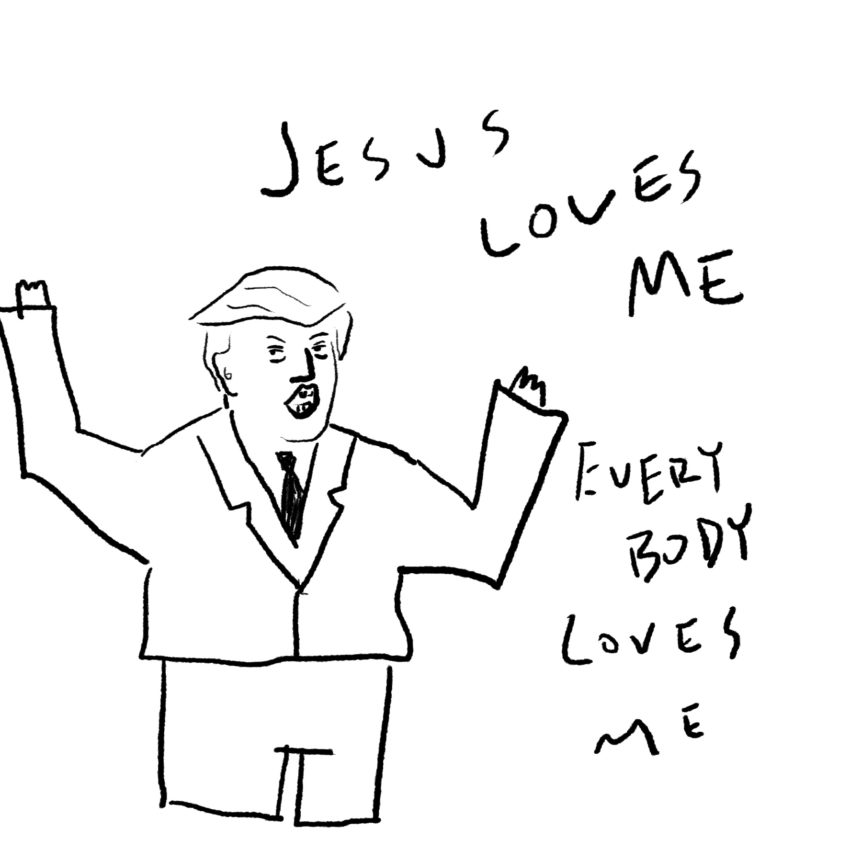 *Disclaimer: Don’t be fooled by the title. I’m not a Trump supporter, this is about something else.*

I support the right of my evangelical friends and family to vote for a person like Donald Trump. If you share his values, support his policies, and believe he is somehow the most qualified person for the job, then please exercise your right and vote for your man.

But as someone who takes his Christian faith quite seriously, I’d like to ask one simple favor.

Can we please stop pretending your vote is in any way informed by your faith?

Even if you set aside his personal moral shortcomings (something 90s slick-willy-outcriers seem surprisingly quick to do these days), you’d be hard-pressed to find any common values shared between Jesus Christ and Donald Trump. While Jesus is always on the side of the oppressed, marginalized, meek, and excluded… Don is clearly on the side of the privileged, rich, oppressive, exclusive, hateful majority (and more specifically, he’s simply on the side of The Donald).

In fact, I challenge anyone to find a single one of Trump’s values that falls in line with Jesus’.

While Jesus said “you cannot serve both God and money,” Trump pulls no punches on his choice “I’m very greedy. I’m a greedy person. I love money.” Jesus promised deliverance from fear, while Donald perpetuates and exploits it in every way possible (and it’s working out fabulously for his campaign).

The only thing they have in common is the preference for women “on their knees”, but I’m pretty sure Don’s not talking about prayer.

Here’s the thing. Obviously the guy has struck a chord with many. He’s brought the fears of the masses to light, and offers a return to “greatness” for white people all around the country. I understand why that might resonate with so many of my evangelical friends.

If you believe policies that favor corporate welfare over public are best for the nation, support it. If you trust more war will bring more peace, go for it. If you think violent retribution is best for anyone who steps out of line, knock em dead.

I’m not interested in shaming you. I’m not going to bother attacking the man (let’s face it, his followers freakin LOVE haters).

But please just be honest. It has nothing to do with your faith.

And it’s frustrating for someone like me, who is unashamed to call himself “Christian” to consider I may need to come up with a new label. Because if Christianity is somehow represented in anything Donald Trump stands for, I can’t be a part of that club.

Anyone But Hillary. Really?… Anyone?

To be fair, most my evangelical friends are feeling lost and frustrated with their political party. They despise the man, but don’t see any other recourse but to vote for him anyway, because they so desperately want to keep Hillary Clinton out of office. In fact, the same is true of many Democrats who are less-than-comfortable with Hillary’s record on war and relationship to corporate money, but feel they must cast a vote “against” Donald Trump.

At what point in America’s history did an individual’s vote become “against” something rather than “for” something?

I would challenge all my friends, regardless of political posture to cast your votes for those policies and people you feel most worthy. I challenge you to walk out of the voting booth proud of your decision, whatever it may be.

But this question: if you feel you can’t escape choosing “lesser of two evils,” and you really, truly claim to vote according to your biblical principles… can you still, honestly say Donald Trump is lesser?

It’s true. Hillary has given us reason to doubt her honor. She is a politician, after all.

But she is someone who, despite her own faults (or the pragmatic choices she’s made to survive as a woman in politics), wants to support other women, help the poor, and lift up the oppressed. She wants less violence. She desires more opportunities and better education for kids.

This is once again, in stark contrast to Trump’s plan to squash the weak, ban the others, limit religious freedoms for those outside the lines, torture prisoners, and his personal record of mocking the disabled, disrespecting women, racism, promoting excess and debauchery, exploiting addictions, and god-knows how many human rights offenses around the globe in support of his brand and products.

So hate Hillary if you want. I truly understand.

But if the teachings of Jesus are your benchmark, and “evil-ness” is your primary factor, can even she really be considered the more evil of the two?

(Again, “evil” isn’t your only option. Make another choice if you must.)

It’s no secret this is one big issue most evangelicals consider black-and-white enough to trump all others. As someone who greatly values human life in all forms, I understand.

But I suppose I’d ask you to consider a couple things.

First, to entertain the notion Donald Trump would or could stop abortions is silly.

Second, to consider abortion anything less than an incredibly complex issue is failing it the serious consideration it requires. It is easy to say “abortion is murder,” without considering the effect of unwanted pregnancy on women, raising unwanted children, giving away an infant you’ve carried for nine months, the look of a rapist’s eyes in your child, the guilt that comes with a failure to love a child, the inherently unfair option for men to simply walk away, and on and on. I say all this not necessarily in justification of abortion practice, but in fair recognition that it isn’t as simple as either side of the debate would like.

Third, it’s ridiculous to think Trump would or could stop abortions.

Did I already mention this? Seriously though. If abortion is the one thing you care about, this dude is not your answer.

Finally, could you consider there may be a better way to reduce abortion in the U.S.? For example, I believe better education and greater access to health services (including and especially contraception) for all girls and women are key ingredients to reducing unwanted pregnancies.

In another appeal to cast your vote “for” something, rather than against, consider using your power to vote for those things that not only potentially lower abortion rates, but also offer greater opportunities for our daughters to live more healthy, informed and powerful lives.

But your Bible says “There is no fear in love, but perfect love casts out fear.”

Not to say that fear is in and of itself evil. Fear is as natural a human emotion as any other, and many fears are fully rational and justifiable.

But throughout the Bible is a persistent message that fear is often founded in lies. The Apostle Paul reminded his protégé Timothy “God gave us a spirit not of fear but of power and love and self-control,” and encouraged him not to necessarily avoid suffering at all costs—for example, to the point of denying or oppressing others—but rather to “share in suffering for the gospel by the power of God, who saved us and called us to a holy calling, not because of our works but because of his own purpose and grace, which he gave us in Christ Jesus before the ages began.”

Your fears should be taken seriously. But stop for a minute to consider if your fears are misplaced.

Is it possible your vote is informed not by your faith, but by your fear?

If you’re ok with that… go ahead and vote Trump. Just leave Jesus out of it.