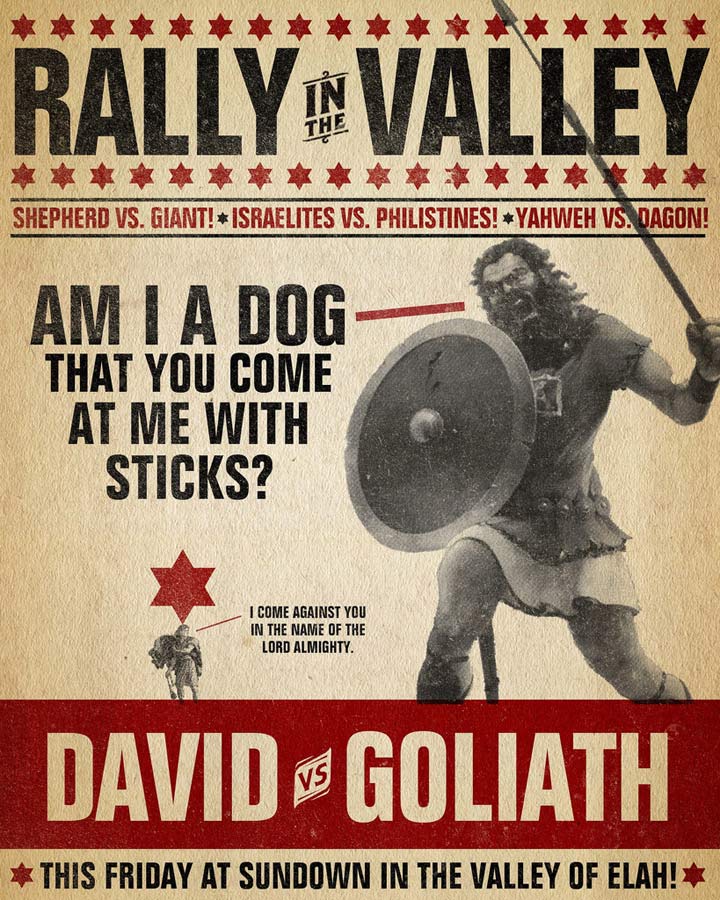 Special Contest: Win this or another art print from Jim LePage’s Word Designs – Details below!

Art and Faith have been intersecting since the dawn of civilization. I love finding examples of artwork that demonstrate spiritual ideas and manage to defy cliché (aka: the Thomas Kinkade effect).

Jim LePage is an in-house design guy (I used to be one of those guys) at Woodland Hills Church in St. Paul. He’s in the middle of this really amazing series of posters-Word Designs. Each poster represents one book of the Bible. He’s also including insights to his thought process behind each design as he releases them on his blog. It’s always interesting to catch a glimpse of an artist’s processes.

I particularly like how Jim didn’t necessarily try to capture the main theme for each book, but rather designed on a particular idea, story or passage that stuck out to him.

I highly recommend you check them out and purchase a few for your home or church.

On top of all that, he seems to be a pretty swell fellow if I do say so. I really appreciated the candor and thoughtfulness he put into this interview.

I’d love to say something really cool here, like the smell of the forest at 2:00 a.m. in Northern Minnesota, but honestly, it’s coffee. I love the smell of good, strong coffee. I like coffee that bites my mouth because it’s so strong.

I’m not a morning person, but the smell of coffee makes me want to be awake and start my day.

Good live music. A really good show can make my year. In my experience, they don’t happen often, but when they do, it sticks with me for weeks. The last show I saw that gave me that feeling was seeing Sunny Day Real Estate last year.

This may sound weird, but recently I’ve recently been thinking that I’m going to get some kind of severe damage to my right arm and I won’t be able to use a mouse anymore. I make my living, and my art, using a computer and mouse. I don’t know if it’s really a fear as much as it’s a weird selfish paranoia.

You have a post on Strong Odors where you give 24 pieces of advice to the 17 year old you. One of the pieces of advice was “You don’t have to be good at drawing to be a good artist.” I guess that’s what I’ve learned this past year. I’ve learned that even though I never excelled in art and I still can’t draw, I am an artist. I never thought of myself that way. I’ve always thought of myself as a guy who makes stuff on computers, but never an artist. Doing a personal project really revealed to me that what I’m doing is art. Whether it’s good or not is up for debate, but it is art. 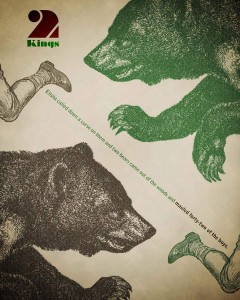 My most recent work is an ongoing personal project called Word, a series where I create original designs for each book of the Bible and write a short reflection/summary of the book. In short, I started the project because the Bible always seemed boring to me. I wanted to get more out of it so I decided to combine it with something I really like – design. I’m going chronologically and currently I’m up through Obadiah. It’s been a cool project in a couple ways. First, it’s made the Bible exciting to me. Anytime I read it, I’m imagining the stories as designs, and that makes them feel more vivid. Second, there’s been a cool response from people who have seen the designs (like Strong Odors, for example). Recently, I made prints available for some of the designs because I kept getting so many requests for it. When I started the project, I never would have guessed that people would want to have them hanging on their wall.

I do, especially during my Word project. There have been a few designs that have impacted me in a pretty heavy way. Joshua was such a violent book, with much of the violence seemingly directly ordered by God. Wiping out cities of men, women, children, even animals at times. I’d say that was a spiritual struggle. I did not like creating that design. It was gross and ugly and to be honest, I wouldn’t want to do it again.

On the other hand, the design for 2 Samuel was quite different. I ended up focusing on contrast between Jesus’ Kingdom and David’s Kingdom and some beautiful stuff that came out of that for me.

I can’t stop listening to Gillian Welch’s “Time (The Revelator)” album right now. It’s around 10 years old, but gets more amazing each listen. Radiohead’s “In Rainbows” is another one that is in constant rotation. As far as recent stuff, I’ve really been into the new National album.

Here is your chance to win a print of your choice (11″ x 13.8″) from Jim’s store. All prints are made using the Giclée printing process with archival quality, pigmented inks and acid free paper (in other words—real nice). The drawing will run from today until next Thursday night. You must have completed all three steps by midnight October 7th in order to be entered.

First step to enter is by following Strong Odors. You can do this any one of these three ways:

Visit Jim’s shop and check out all his designs available for print. He doesn’t have all the Word designs up yet, but he has some sweet ones up there.

That’s it! Complete these three simple steps by midnight October 7th and you’ll be entered in the October 8th drawing!

Double your chances to win! If you have a blog of your own, write about Word Design contest with a link back to this post. Include a link to your post in your Holla Back comment to be entered a second time in the giveaway!