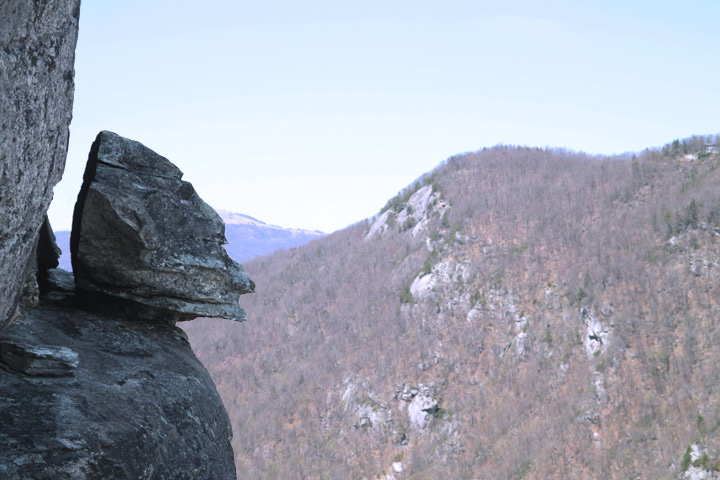 It’s a really great destination for families since they’ve added steps, boardwalks and railings to make the hiking accessible to anyone.

We kept calling Exclamation Point “Explanation Point,” which doesn’t sound nearly so awe-inspiring… but it’s worth the extra 1,000 steps or so past Devil’s Head (above)… and the hike back to ground level is really cool, with rock outcroppings and alternate views of the Chimney Rock.

A few of us still had the energy to hike the mile or so out to the 400-ft. Hickory Nut Falls… we weren’t allowed nearly as close as we’d hoped, but maybe next trip there will be fewer park rangers around…

Actually, situations like that are kind of adjusting my parenting.

Those times when I know I would jump the barrier… but don’t want my kids to.

Over the past several years I’ve been trying to keep them from harm’s way… offering up a “be careful” or “no, no, no…” if I happen to catch them doing anything slightly dangerous (like on the jungle gym for instance).

But at some point over the past year I’ve realized… the most fun things in life are dangerous.

I’ve got to breed a little recklessness into them.

I know when I was 8 years old I would have been 20 feet up in a tree… so why do I doubt my own kids’ exploration skills… and more importantly, why would I ever want to rob them of those experiences?

So now I’ve come to anticipate stitches and broken bones and scraped knees and bee stings and fat lips as an imminent part of our life together.

And I expect heartbreak and detention and fender-benders and cigarettes to be a part of our not-nearly-distant-enough future.

I hope that right now I’m teaching them to make healthy choices as teens, to discover which adventures are worth the risk (love, compassion, discovery)… and which ones are not (rebellion, revenge, status)…

Hopefully the present scrapes and bruises will help future decisions come not from fear, but from wisdom.

Check out more of my photos here.

When I was younger
I used to go and tip cows for fun, yeah
Actually I didn’t do that
‘Cos I didn’t want the cow to be sad
But some of my friends did
They were all just a little bit wicked
They’d blow up mail boxes
With a baseball bat
Go for direct hits

On Halloween you can forget it
They throw rotten eggs into traffic
Toilet paper the fences
Throw the tables, chairs, and the benches
After practice
Sometimes we would break into mad fits
Causin’ damage
(Burnin’ amplifiers and mic stands)

Everybody get dangerous (Boo yah!

Everybody get dangerous (Boo yah!)

What will we say when our kids come to us
And ask, with a smile on their face,
“Hey Dad, my friend’s got some new ninja swords!
Is it cool if we slash up his place?”

Strong Odors Chimney Rock and the Value of Risk