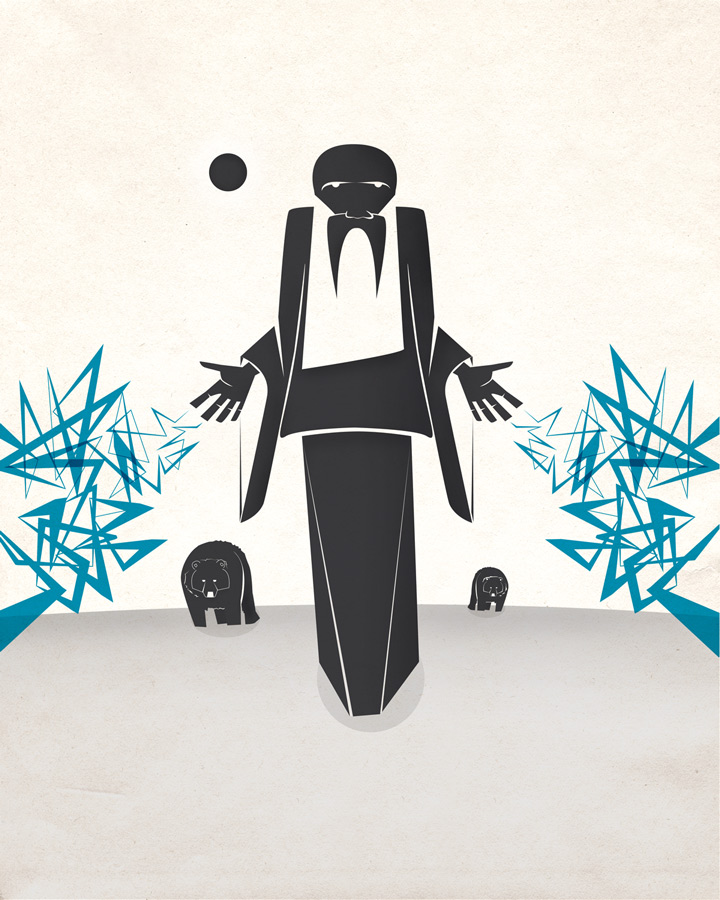 I’m not sure what happened in Elisha’s life that lead to his role as possibly the most troubled of prophets.

Maybe it was abusive parents or no parents at all.. maybe that’s how he ended up with his master Elijah in the first place.

Maybe he grew up devoted to religion and watched his family exploited because of their commitment to Yahweh..

Perhaps he just grew sick and tired of witnessing Elijah working so hard to turn back the kings to God.. only to be consistently threatened and exiled.

Elisha’s not going to waste his time casting his proverbial pearls before swine… so he’s quick to send man-eating bears and hurl lightning bolts on any approaching mobs.

Whatever it is, it’s easy to imagine him sitting in his stereotypical holy-man position atop the mountain. Only as the soldiers draw near he knows they’re not seeking wisdom. So why bother humoring them?

I can’t say I understand the violence of the Old Testament… but what I do love is a prophet with problems.

Because I can relate to a guy like that, you know?

I may not be zapping people.. but to say I have intimacy problems would be a bit of an understatement. I’m happier just sitting on my favorite summit hoping no one comes close enough that I have to lightning them… and I may not be siccing my bears on the town children… but I sure do mumble under my breath a lot when the neighbor kid mows the lawn at 8am on Saturday…

But what what challenges me about this Old Testament Hancock is that even though I may be considerably more tolerant than Elisha, I doubt I have his compassion.

In the midst of dissatisfaction we’re all sharing with Wall Street, would I be willing to offer healing to the most oppressive of executives? You know, the kind of guy getting fat by exploiting slave labor and blood diamonds? Would I even point him in the direction of the Jordan River?

And if I did, would I have the courage to say “don’t worry about it,” upon his offer of compensation?

Elisha the Troubled Prophet is also available as a limited edition print. Get one today in my shop!