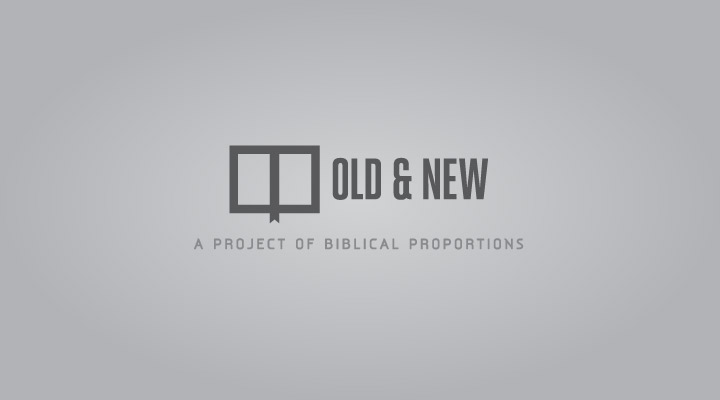 This past year I’ve been able to meet several Twitter connections face-to-face for the first time. It’s a pretty cool experience picking up with friends as if you’ve been that way for years.

I was especially lucky to meet up with Jim LePage at last summer’s WMCFest. We’d already featured one-another’s work on our respective sites, and with the overwhelming amount of shared passions it was really only a matter of time before we joined forces on something big.

What was really cool was how we’d both already dreamed up a similar idea independently from one another—to do a collaborative biblical-themed design project with skilled graphic artists from around the world.

Over the course of the year and multiple spurts of emails the vision for this project became clearer and clearer, and I owe Jim a lot for really bringing the spark to get the wheels turning in the beginning. By the end of 2011 Old & New Project was a real live thing—we’d enlisted two dozen artists from across the U.S., Canada and Europe to contribute work and had Jared Erickson bringing his skills to make the website work in a way that I’d have never have been able.

We based our idea on several similar projects that had influenced us over the past few years, Live Now, Raygun52, 50 and 50, and Momentus (among others).

Our idea to illustrate Bible stories naturally required a new element that (as far as I know) hasn’t been a part of other similar projects—writing to accompany the image. I set out with a challenging task earlier this winter to comb through the entire Bible, first selecting the mix of familiar and unfamiliar passages from the Bible and then to re-write the stories for web readers.

My goal in writing these is to communicate the larger narrative of the Bible at least in some small part in every single story. Since these are written for the web however, weaving the big story and effectively telling the smaller (and sometimes unfamiliar) stories turned out to be pretty tough. It has been crazy super fun being able to dust off my old Bible degree and put it to good use for a change though.

The other element to this project that is both unique and totally exciting is that Old & New will be part of something bigger than illustration and design. Each day that a new design is posted it will also be available for sale as a fine art print from our Society6 shop. Then proceeds of those sales will be donated to Blood:Water Mission—an amazing non-profit organization empowering communities to work together against the HIV/AIDS and water crises in Africa.

In fact, we’ve found that $1000 raised from Old & New can build a rain water catchment tank in Lwala, Kenya—which will provide safe drinking water to this village for generations.

As you can imagine, Kenya takes up an enormous hunk of my heart, so it’s tough not to get emotional just considering the fact that my small contribution to this little art project will have such a tangible and substantial impact on real people across the sea. Check out the O&N blog for more details on Lwala and Blood:Water Mission

With an indefinite amount of source material, who knows how far this project will go. We have big hopes for the future, so share Old & New with your friends so that we can continue into more rounds, other media and alternate universes!