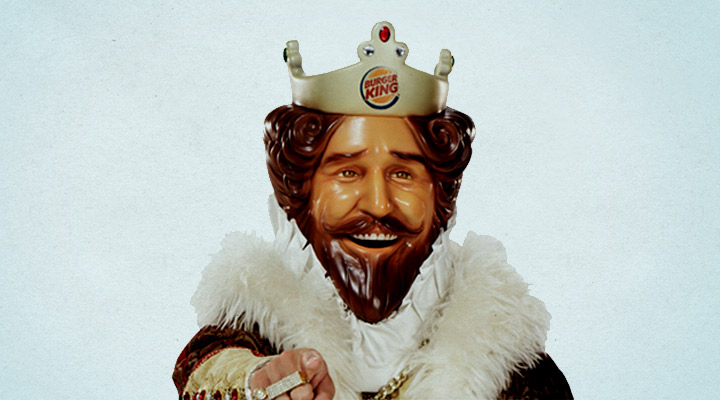 When Burger King first brought back their mascot a few years ago I thought it was the funniest and smartest ad campaign I’d seen in a long time. I was creating my first TV commercials at the time so I’d notice stuff like that.

It was also the first time that I realized other people from my generation were now working in the creative industry and companies were taking risks with them for their marketing. As soon as I saw the first ad with The King I knew it must have been created by other dudes who like me were weaned by the likes of Pee-Wee Herman and Ren & Stimpy.

Although BK seems to have shifted to the less-smart and more affordable approach of “sex sells” in recent advertising, it is still The King that manages to save the campaigns from totally bombing.

You just can’t help but love the guy. Even those that find his character “creepy” still laugh when he’s on the screen.

There is just something about his personality…

Well, come to find out a great deal of his personality comes from the man behind the mask.. er… crown… Todd Wilkerson.

As I was getting to know Susan Isaacs this past year, she described Todd as “the funniest actor I know.” Since then, I’ve been wondering about this guy and how he must absolutely despise The King character.

I know when I’ve worked on any one project for too long (even one I enjoy or am proud of) I really start to hate it. Not only do I just get sick of working on the same thing every day, but often the thing I once thought was such great work I now think totally sucks.

But here you’ve got a guy who’s not only been playing this character (even though it’s a great one) for years, and I’ve got to imagine that somewhere in his spirit he must be disappointed that after all those years of shedding blood-sweat-and-tears to make it in a creative field to do the work he really believes in that it has been behind this ridiculous mask that he’s finally gotten a decent paycheck.

So I wondered if Todd would unleash all his bitterness and repressed rage against The King out in this interview, like Clark Kent battling evil Superman in the junkyard.

But it turns out Todd’s got a great sense of humor (I suppose that shouldn’t surprise me) and even though I’m sure he might have rather made his living playing critically acclaimed movie characters, he’s got a healthy attitude towards The King.

In fact he recognizes the weird debt of gratitude he owes the fiberglass monarch and understands that not only is work work, but having such a stable bit of work allows him to invest in the creations he enjoys.

And when you come to think of it, a mask doesn’t make a character great any more than a camera makes a photographer great… it’s because of Todd’s unique giftedness that our generation’s King of Burgers will go down in history.

Which oddly enough is something I think is pretty cool.

I have a fairly large nose. I like to refer to it as a strong Roman nose. I can smell things before most people. Just like Radar on Mash could hear choppers before anyone else I can smell things before anyone else. Which doesn’t work well for me under the “He who smelt it dealt it” theory. I love the smell of peanut butter, coffee, clothes dried w/ Bounce, pizza, and balls… (maybe I should explain this one. Baseballs, Basketballs, Footballs).

I guess it’s, first of all, just familiar. If I were to be blind folded I’m sure I could smell her out. Also, that smell represents a person who I love tremendously. It represents everything about her; her giggle, her personality, everything. It wouldn’t matter how bad the smell was I would still love it because I love her. Luckily it’s a sweet smell.

Spelunking! I’m a big spelunker! Actually, no. (I had to just look that up. It’s Caving…exploring caves! Crazy) Just simply BEING with my family makes me feel alive. Never a dull moment. Even the mundane routines of our life can make me feel alive as we share them together. Performing makes me feel alive. Whether it’s something as simple, performance wise, as playing the King or playing something that is more difficult emotionally. I’m a comic actor and I feel tremendously alive using the sense of humor God has given me. Even if I swing and miss and you don’t laugh I still feel alive. Some of my most “feeling alive” moments have happened while performing improv comedy because in order for it to work you have to let go completely and just let inspiration happen. When that works it’s a tremendous feeling because there is nothing premeditated about it. It just happens. Also hanging out with friends and getting closer with them makes me feel alive. Getting to that place where you are completely comfortable with each other where you can easily be yourself. That doesn’t come easy, but it’s the kind of relationships I believe God has intended for us.

I’m afraid I have no fears.

No, actually, I’m afraid of following through with whatever creative endeavor I feel inspired to do. I’m afraid it will be fruitless and not be what I expect it to be. When the point from God’s perspective is just the process of doing it. Letting Him dictate the end result. I’m also afraid of LA traffic.

I’ve learned to let go more of the expectations I put on myself for creative success or for living up to my potential (I think wearing a creepy fiberglass King head, a gown, and white tights may have helped this thinking:)). I’m learning that pressure to succeed or expectation of outcome gets in the way of a deeper relationship with God. It’s a cliche to say it’s not about the destination it’s about the journey, but it’s so true.

I’m editing together a comedic sketch I shot. I’m slowly working on putting my own “content” together instead of waiting around for an audition or the right audition. I just want to create for the sake of creating and not have a giant expectation for where it will lead. I had fun filming a commercial recently (as me and not The King) that was a Super Bowl spot this year. That was cool. I’m also working on preparing for child number 2 to enter this world and that’s pretty cool.

Sometimes. Yes, sometimes while performing I DO “Feel His pleasure when I run.” To use the line from Chariots of Fire. I feel His pleasure. I do feel like being creative sometimes does feel like an effort to get close to God through the gifts he’s given me. I don’t know if I can really even articulate this feeling. I think anytime we get out of our comfort zones or step beyond our fears and pursue any creative endeavor it’s an opportunity to get close to God. To walk with Him thru the experience can only draw us closer to Him.

You mean other than anything by Justin Beiber? Actually, we are strictly a NO Beiber music zone in this household. I’ve let a little Miley Cyrus in and that’s enough. I’ve been hooked on U2’s “I’ll Go Crazy If I Don’t Go Crazy Tonight”. I love those lyrics. I’ve gone back to listening to Audioslave lately. They’re defunct now and it’s fairly hard driven rock, but I find Chris Cornell’s lyrics amazing. There’s a definite testimony going on in those lyrics along with questions of faith. I’m also hooked on Jazz standards. I can sing those old crooner tunes all day long.