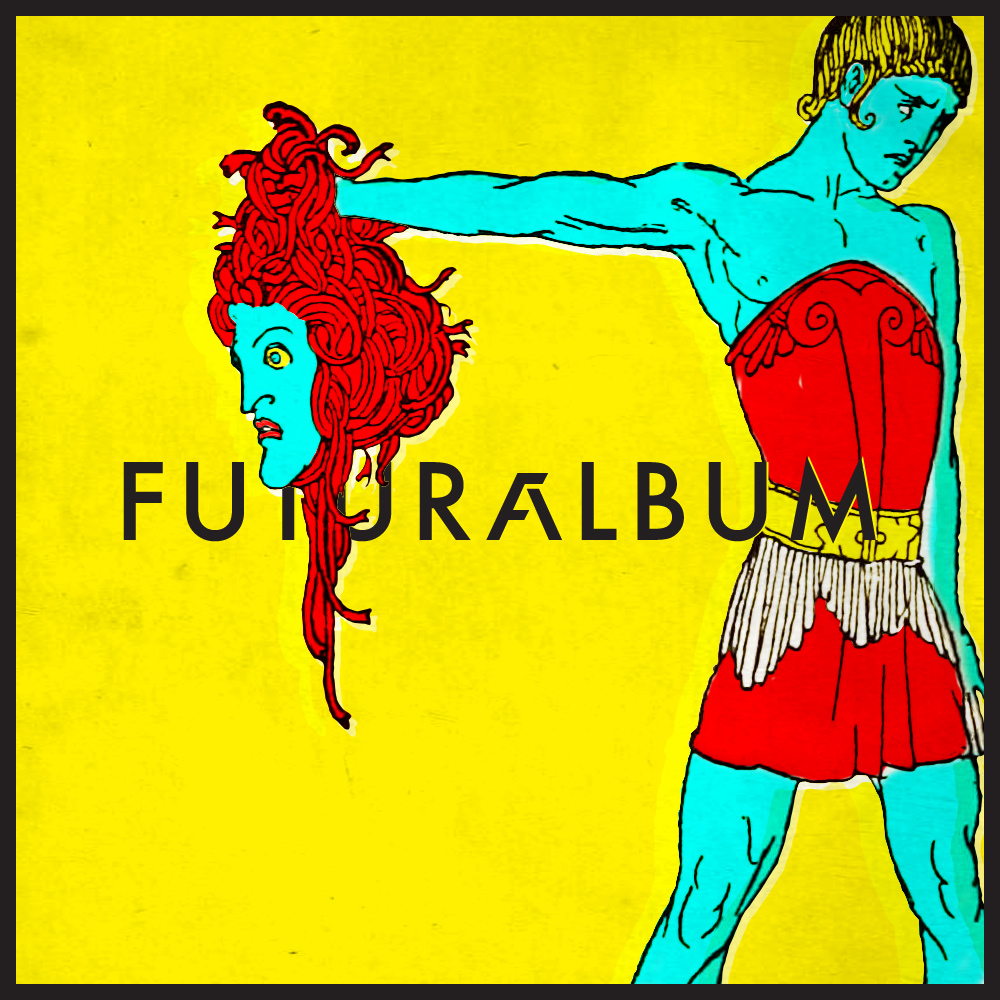 This week, my latest collective design project FUTURALBUM comes to a close (at least for now). I launched this album art design project in January of this year, with about 70-or-so contributors lined up, and ended with over 150 incredible album covers published from 100+ international designers!

As always, it is a ton of fun organizing a digital design project like this, and especially cool to watch the great variety of talent exercised in totally unique and creative ways. The response from both contributors and followers has been overwhelmingly positive, and I owe so much to each of the designers who volunteered their time and gifts to make it a reality.

Rather than rambling about my own observations, I asked a handful of FUTURALBUM contributors to share a few of their personal favorite designs from the project and what exactly stood out about each.

Thanks for an awesome year of rad music design!

Great use of the elements. The contrast of the colorful appealing elements into the skull is really creepy and layered.

Minimal and beautiful. The configuring of the letters into a cross is a stroke of genius.

With each musician/band, the artwork that accompanies the album creates an atmosphere for the audience to dive into and pulls from the culture they are known for. The three covers that stood out in particular have really inspired me. Kid ‘N Play (designed by Luke Bott), has this great uplifting array of colors that brighten up your mood.

Dr Dre’s “2001” (Scott McRoy) follow up to “The Chronic” play on psychedelic colors and pot leaf imagery are driven home by the subtle smile of the skull.

The three pieces begin to tell the story of each album and that is what contributes to their success. FUTURALBUM is an excellent design challenge and a fun project that showcases the ranges of solutions and styles from such simple constraints, as well as getting to create alternative artwork for some of your favorite artists.

It’s so hard to choose, but ultimately this cover feels like it most embodies the spirit of the project without sacrificing the tone of the album. It’s a super creative use of all those random flower diagrams on the Flickr group, and the layout and type treatment perfectly accent the illustration. This definitely stands out among a lot of really great work.

I love this cover for its simplicity and attention to detail. I’m a sucker for textures and overprinting, and this is really well done. Also points for picking a really great album!

Chloe Galea: This Will Destroy You, Their Celebrations

Wow, this is absolutely beautiful. It fits the tone of the album (better than the original cover!), and the coloring on the butterfly is so well done. It’s powerful and visually striking, just like the album itself.

FUTURALBUM is such a great project. I love projects with constraints—it makes some things harder because you can’t use your usual workflow, but it makes a lot of things easier because we’re stripped of choice. We HAVE to use this or HAVE to use that. And it’s fun. That said, I like the pieces that people created that looked like there were no restrictions. It’s so impressive to have your hands metaphorically bound, but still come up with something that looks like your hands were free.

This one is super simple, but it doesn’t feel flat. Even through flat geometric shapes, Chris was able to give so much dimension and make the piece feel so contemporary. Plus, I love Graceland.

Doc Reed: Devotchka, How It Ends

This piece has one of the most dynamic compositions of the whole project. There’s a ton of depth in the plane the focal point is deep in the composition. It’s so impressive when people are able to find images that match the name of the album so well because there are thousands and thousands of images in the Flickr archive to dig through. The illustration that Doc found of the birds matches the phrase “how it ends” so well.

I love this one so much. It doesn’t feel like Seth was given any constraints—it feels like a well-thought-out, free concept and execution. I could stare at this one forever. It’s so striking on first look, but even when you get in close and start studying it, it doesn’t seem like something that was digitally thrown together—the edges of each strip that makes up the face are slightly jagged, slightly crooked. The rounded edges of the letterforms and the fact that they aren’t pure black was such a strong decision. This one rules and I love it.

Ryan Hollingsworth: Brand New, The Devil and God Are Raging Inside Me

I personally tend to put entirely to much into my pieces. Textures, color, patterns and under drawings tend to push my work toward the cluttered collage portion of the spectrum. The simplicity and cleanliness of black and white, to me, serves as a yin and yang, good and evil. Coupling this with the imagery of a cross and serpent only pushes this balance of good and evil in our culture.

This interpretation resonated with me on several levels. My favorite is the nod to the subliminal messages with the type. Far to often we under utilize type in our design. The first thing that hit me was the skull. Using found images to build it was a brilliant move. I came across several skulls and bones in my searching. But to take elements outside of a genre to build a staple within a genre is a stroke of genius.

Joshua Krohn: Further Seems Forever, The Moon Is Down

This album hits a sweet spot for me musically. So when I saw it hit FUTURALBUM, there was an immediate excitement for me. Clicking through and discovering the extent that was done with the interior pages was wonderful.

Joshua’s Further Seems Forever submission went over-the-top with a full 16-page liner notes booklet including lyrics and art. See it all on FUTURALBUM

Both David Sizemore’s R.A.P. and this F.T.F. album went above and beyond. Thinking holistically about an assignment is key. Being able to understand the scope of the project while adhering to limitations is essential for designers. Creating within limitations is a mark of a seasoned and wise designer or art director.

First of all I LOVE Bikini Kill so it was so great to see them featured. I love how Amy has featured a strong and badass woman but juxtaposed it with the pastel colored background and soft imagery. I think it really encapsulates what the band and their music are about.

Melanie really nailed the slightly ethereal and transient nature of the music. I also love the minimal color palette and the feeling that no matter how closely you study the imagery, it feels as if there’s something tangible that is just out of reach. It’s really beautiful.

This is just a masterclass in color and composition and talks to the fractured style of the music. I love the saturated colors and how they sit next to the old textbook type imagery. It has a great energy and buzz about it that really fits with the soundtrack. If this were the album cover that I was rolling a joint on while listening to the record it would be basically perfect.

A top three for FUTURALBUM is a tough task, but I’ll do my best:

Matt managed to create a visually simple, yet highly suggestive composition. The two portraits echo each other in a mysterious way, leading me to extrapolate stories about the heartbreaker and the heartbroken. The addition of the mathematical diagrams and symbols adds to the mystery of their romance. For some reason, I discovered this piece close to the time I saw The Imitation Game in theaters. Missing the second overlaid portrait at first, I saw this enigmatic young man, stamped with science-infused imagery, as a beautiful and fitting visual scene for the movie. I have yet to listen to a song by Ryan Adams.

Two words: nailed it. The American Recordings series is how I plunged into Johnny Cash’ music after seeing Walk the Line, and reading the I See a Darkness graphic novel about his life. The solemn, stern face of the stained glass old timer fits with the themes Cash was exploring during the recordings. A fitting visual companion to the third volume of the musical testament of a legendary artist at the dawn of his life.

It was tough to only pick three! I was going to mention Matt Stevens’ take on “Songs for the Deaf,” but I already mentioned him once. The other close contestant was Jeremy Burns’ shot at the sleeve for Nine Inch Nails’ Pretty Hate Machine. Ben’s take on the cover of Voyage wins because of its uniquely striking visual. We’re again in a case in which I have no knowledge of the album, but the jaw bone used as the “V” of “voyage” would be enough to have me pick it up and listen to it. The type hierarchy is exquisite between Futura Light, and Futura Condensed Extra Bold. Finally, the splash of translucent yellow brought by “Voyage” is a welcome highlight in the composition.

But I could have also included Joshua Krohn’s take on The Moon is Down by Further Seems Forever (bold, dark, and extensive visual system), Karen Kurycki’s take on Lonerism by Tame Impala (a clever use of a great piece of iconography), Noah Jacobus’ stab at Odelay by Beck (so colorful and dynamic – a good fit with Beck’s musical landscapes), Melissa Balkon’s effort on The Rising Tied by Fort Minor (I’m a sucker for atom/science-related imagery), Chloe Galea’s take on This Will Destroy You’s Their Celebration (a fitting visual allegory for the band’s music), Joseph Hughes’s stab at Kathleen Edwards’ Voyageur cover (beautifully assembled iconography and type), and Chloe Stein’s take on Yeah Yeah Yeah’s Show Your Bones (I love that band!).

I’m positively amazed by how rich, varied, and extended the body of work composing FUTURALBUM is. A great testament to its contributors’ talent, but also to the range of emotions music can express and induce.

What Are Your Picks?

Thanks so much to all the FUTURALBUM contributors, and to those who took the time to share their favorites here.

This represents just a tiny sample of the incredible designs on FUTURALBUM. I’d love to know what your favorites are too! Take a few minutes to check out the 150+ album cover designs on the FUTURALBUM website, or FA Instagram and post your favorites in the comments below.